There has been alot of talk abut cam followers in the mini (A-series) community of late. So I thought it would be a good idea to go through and explain a few things.
When you assemble a motor and wind over by hand the push rods should rotate at least a quarter of a turn per revolution. Some followers maybe a little tight in the block, they should be able to fall in with there own weight with light oil.
Here’s a video that shows the rotation of the pushrods with correctly ground followers.
Most followers today in a mini should have a radius of around 72-74” to get them to rotate correctly. 95% + of the followers I’ve been getting lately have been all but flat, with virtually no radius at all. To check the radius on the followers, it is very simple. Place the followers of a sheet of glass or a flat surface, tilt the follower to one side and you should be able to get 0.0025 to 0.003 feeler gauge under the high side of the followers. If you can’t, I suggest you get them reground.
Here are some photos of some brand new followers that I have just touched to show the problem. 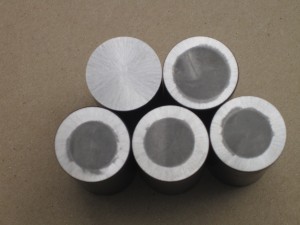 The follower in the top left, shows how a follower should look when correctly ground. The rest have been just touched to show the incorrect way they had been ground. 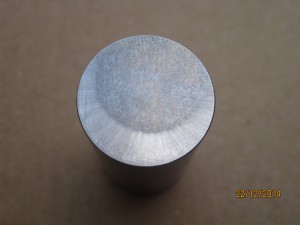 Cam follower quality issue continues…..Despite shouting from the roof tops for months on end now about major issues with A-series followers being supplied from the vast majority of A-series specialists and cam manufacturers, many are either sticking their heads in the sand hoping the problem will go away or simply not believing there is an issue. These pictures will hopefully underline the seriousness of the problem. Checked before fitting showed the followers to have flat faces, not the std. radius profile required for proper rotation. 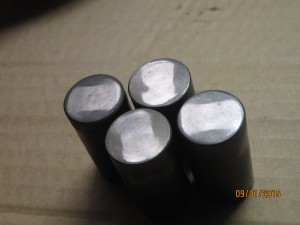 Click to picture to enlarge
A Kent MD266 cam and follower kit was purchased, built in to an engine which I then ran on my dyno for a few hours. Paint dabs on the push rods showed the followers were not rotating. The motor was stripped down and followers removed for inspection. As can clearly be seen by the wear stripe across the faces, the followers were simply going up and down, not rotating (two wear rotating fully, and two were oscillating back and forth, while four were just not moving at all). Further proven by the wear on the sides of the followers. The wear line should be all he way around the follower sides, top and bottom. The wear fore and aft on these followers line up with the stripe across their faces. These followers would have wiped the cam out in a couple of hundred miles.